Despite likable main hero and his interesting journey, stripped to the bone, "Love, Simon" is a very mediocre romance film

“Love, Simon” is apparently first major studio film that focuses on gay teenage romance. And though, I have go to admit here, neither “gay”, “teenage” nor “romance” is my choice of film genre, I decided to give this movie a chance. After all, shouldn’t I be treating all movies equally? Especially since everyone so much loved this film. And I have to tell you, it is not half as bad as I have expected, but at the same time not half as good as people tell it is.

Simon a regular 17 year old kid. He has loving parents and adorable little sister. He is in his senior year in high school. Every morning he picks up his friends – Leah, Nick and Abby, to school. On the way they order coffees, listen to pop music, dream of big life. Everything is good for Simon. Except he has a big secret. He is gay. And he hasn’t told a single soul about that. Instead day in and day out he has to pretend he likes girls, hide his lusty looks at sexy gardener and pretend his is huge macho for his dad. And then, one day, anonymous guy who goes just by a nickname “Blue”, puts a post online on school internet forum admitting he is gay and writing about his struggles as a gay teenager. Excited Simon reaches out to him, under pseudonym “Jacques” and soon they become very close online. So close that Simon realizes he is in love with Blue. 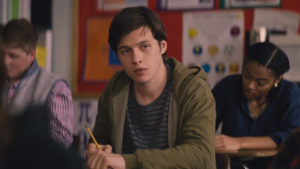 “Everyone deserves a love story,” says Simon and film concentrates on that. Despite me never going through personal experience like that, Simon feels very relatable character. Through Blue and his support Simon learns to accept himself for who he is. Or rather to accept others accepting who he is. For a first half of the movie Simon is under a huge stress. “For last 4 years, you have been holding your breathe,” one of closest persons to Simon says, and that is exactly what we see on screen. I like how the writers were able to show Simon’s emotions and struggle he goes through as he moves from status quo to complete his story arc. I was rooting for Simon.

There is several things I didn’t like about writing. Firstly, second part of the film deals with Simon’s outing and it is not written as good as first half. Simon does pretty weird choices through the movie, that in my opinion make no sense both logically and from character’s motivation standpoint. Without spoilers, Simon has to choose to break his moral code for his own gain and he does so. And although film tries to explain his choices as being done under pressure or “I didn’t have other choice” cliche, I felt it was not something happy, goofy, shy, romantic, likable, smart and positive character like Simon would have ever done. 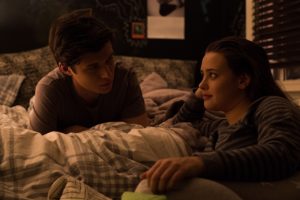 Second, if you strip down ALL the homosexual context, this film is just another mediocre, boring, cheesy, cliche teenage romance film. And it that perspective it is not even a good one! Just close your eyes and imagine Simon is looking for a girl, not boy, and you will understand that you have seen it before. “The Fault in Our Stars”, “10 Things I Hate About You”. “Easy A”, “Juno”, “Never Been Kissed”, “High School Musical” – this list is endless. And in that perspective you will understand that film lacks big punch, a big resolution.

Half of the film is done through narration and, to be completely honest, it was starting to drag me down. Why couldn’t director Greg Berlanti use visual exposition, I have no clue. Especially, I think, with some effort director could have reduced voiceover by 90%. I understand, film deals with Simon’s emotions and you had to resolve to narration, but why not give it another perspective? Like, “Easy A,” for example. Main character Olive also narrates that film, but she is telling the story to a webcam and we are watching the stream. And though there is more narration in that film, it never bores you down, because it IS a part of the narrative itself.

Film is also missing comedy elements characteristic for this genre. I think director missed big opportunity here to introduce some quirkiness and a lighter tone by doing so. Also I really wished the identity of Blue has been hidden. It shouldn’t matter to ANYONE, even Simon, who he is. It should just mattered that he made Simon learn, understand and accept. And be happy. 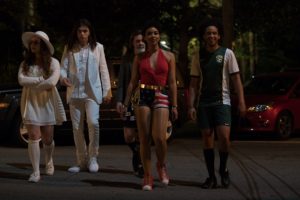 Nick (Robinson) and his crew ready for Halloween party!

Finding a proper actor to play Simon was crucial. He should have been likable, shy and believable. Nick Robinson is able to fill all of these check-boxes. He delivers a heartfelt performance, which is what drives this film. Supporting cast of students were acceptable, but otherwise not worthy of mentioning. Simon’s parents are Josh Duhamel and Jennifer Garner, and I felt that both of them did a weak job. That’s hardly their fault, they are written that way. There are here to fill the compulsory “understanding parent” niche and nothing more. They felt highly underutilized.

Film goes big length showing normalcy and acceptance of who you really are, no matter who you are. With likable main hero and his quest to get love story he deserves, “Love, Simon” is enjoyable. However, when stripped down to basics, film is a very mediocre romance film, that you probably would not even watch.