Though the ending was disappointing, the film itself - structure, songs, choreography and acting was enjoyable

I am not a fan of musicals. It’s not that I don’t like them in general, I actually do enjoy the theatrics, songs, dances. But musicals tend to be (especially recently) over-bloated and so self-centered that the whole idea of watching a musical makes me cringe. Of course, this feeling I have towards musicals have not been made any better by “La La Land” (damn this film!) and “Frozen”. So much bitter taste was left on my mind from these two examples of modern musicals that I intentionally was going to miss “The Greatest Showman”. But it was either this or Oprah’s “A Wrinkle in Time”. You know what I chose.

Self-made promoter, entrepreneur, marketing guru or just “Greatest Showman” – P.T. Barnum is in the middle of circus ring. He is dashing, fabulous, amazing and full of enthusiasm. It was not all that when he was a kid, though. Being a son of poor tailor, he meets charming Charity. Her father forbids her to speak to a lowly peasant and she is sent to school. P.T. is left on the streets when his father dies and has to fight hard to earn bread. He never ceased correspondence with Charity though, and eventually two lovebirds marry. Her father is against it – he is sure she will return to him devastated. And though Charity enjoys their humble life, deep down P.T. knows he has to offer his wife (and their children) more.

For that he pretends to own ships to get a bank loan and buys a museum. Seeing that his exhibits don’t attract anyone, he decides to hire all kind of “freaks” as performers. This immediately turns everyone’s attention. Soon every person in New York knows P.T. Barnum. But his strategy to attract people has also made him a reputation of a con artist. And P.T. decides to prove everyone that he is not just a thief. 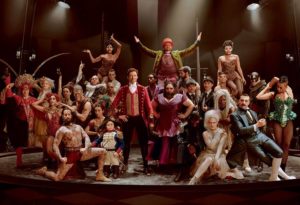 P.T. Barnum (Jackman) and his troupe

Wikipedia says a very different version of our “greatest showman’s” real life and adventures, but I don’t care. I am watching a film, not a history lesson. The film is nicely structured. There a lot of elements to the story that are interesting. And while there is a fair share of lazy writing in the dialogues, overall I think writers did OK job. First two acts are interesting and engaging. Barnum’s rise to the fame and his struggle to be accepted as a serious businessman make a very good story. This is also complimented by (trendy) exploration of diversity and inclusion. Barnum’s troupe consists of midget, bearded woman, albinos, Siamese twins, African-American acrobats, etc. There is a whole side plotline with Barnum’s protege regarding acceptance and breaking of racial stereotypes. It didn’t feel fake. I enjoyed it.

That, unfortunately, I can’t say about the third act. Ending was rushed. It was raw. I actually felt bad for being so invested in the film after this ending. Not sure what happened on the writing table when they were working on this section. I wish they would have made an effort to make it better. Just tried at least. 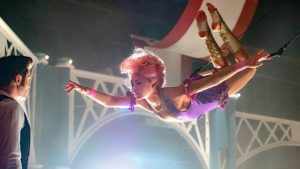 First-time director Michael Gracey does a good job for the majority of film. Scenes are staged nicely. Choreography is good. Film is by no means “Chicago”, which feels like you are actually watching a musical on theatrical scene. And it is also doesn’t remind you of Bollywood movies when people just break into dancing. Yes, they sing a lot. Literally, annoyingly, a lot. But what I liked is that the song progressions are made really nice. Edits and cuts are natural. This is where this film wins over “La La Land” (promise not to mention it again, sorry). You don’t think even for a moment, why the hell they are dancing and singing all of a sudden. It all makes not a lot but sense. I specifically enjoyed musical number by Zac Efron and Zendaya’s characters. Felt right.

Barnum (Jackman) lives for the spotlight

Hugh Jackman is an amazing actor. So much difference in performance compared to “Logan”, it is almost impossible to describe. I bet if you watch those two films back to back you will be totally shocked by the transformation and how he plays two complete opposite persons. And to be honest with you, both this film and “Prestige” show that it is better for Jackman to wear top hat than claws. Zac Efron was a nice addition. He is no longer has to play uber-sexy teenagers. Instead being cast in dramatic part gives him much needed spectrum to show his real talents. Also enjoyed Zendaya as acrobat. Although probably the only professional singer among the cast, she also felt natural as a trapeze artist and dancer.

“The Greatest Showman” is one of the better musicals recently made by Hollywood. And though the ending was disappointing, the film itself – structure, songs, choreography and acting was enjoyable. Much better than “La La Land” (ugh, I am comparing to it!)