Second season of “The Grand Tour” follows hosts Jeremy Clarkson, James May and Richard Hammond on their discovery, testing and antics with various cars. Informative and yet funny, the series focuses on reviews and reactions of the cars as the hosts drive them on the highways, roads, race tracks, abandoned airport tarmacs, mountains, deserts, and in one instance on a lake. This all, of course, is followed by honest and to the bone commentary on the cars. And how one can forget constant bickering and mockery that hosts do on each other?

Format of the show stays mostly same as the first season, with some minor changes. While the premise of the first season was to have mobile studio tent in various countries, in this season this 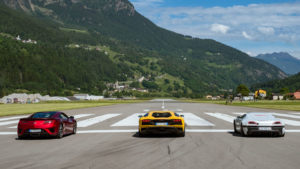 Three supercars, representing past, present and future are ready for drag race

idea was abandoned. Tent is permanently set in the home town of Clarkson, thus there is a very little variation to the scenery outside. On the other hand, this enabled the program to have a Celebrity Face Off. A novelty for this season, it sets two “celebrities” with some very ambiguous common trait (men who live with a bear, drummers of bands starting with letter “P”, etc.) to race in one on one on their race track. Which is a fresh air compared to dreadful Celebrity Brain Crash in first Season.

The structure of the show is very fluid. It might start with one of the hosts reviewing a certain car. It would then veer off to Conversation Street, where hosts discuss various auto related news and gossip. Then the program would continue either with a new film from another host(s) or continue where it left off. Celebrity Face Off segment then follows. Or this might be totally abandoned for some challenge to answer a question (that, to quote the hosts “no one needs to have an answer”).

This is a car show. And weirdly enough, you can’t really call it a car show. There are no vigorous tests, no standards to compare the cars to. And no consistency 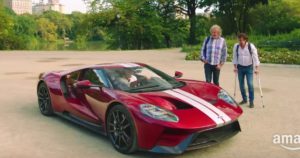 in reviewing the cars either. Clarkson maybe doing his thing, complaining that he can’t fit in the saloon. Hammond would make the car go at incredible speeds. May would seek comfort and stability. Each of the hosts have their own criteria for judgment. And each review is followed by a commentary of other hosts to the reviewing host. Which basically consists of complaining, bickering and calling each other “moron”, “imbecile”, “idiot” or any combination of these words.

In that, the program has a lot of comedy elements into it. Various dumb and pointless challenges, though scripted, provide chance for the hosts to do their thing. Which is to entertain viewers. And entertain they do. Show is full with sarcastic, borderline non-PC remarks by Clarkson, witty comebacks by May, complete ignorance by Hammond. So if you are watching it to find out the specifics of, say, McLaren Sienna, you will be in a surprise. 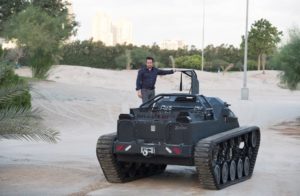 Speaking of cars, this season features an amazing selection. Season starts with three incredible supercars – Lamborghini Aventador, Honda NSX and Rimac Concept One. Then in a-la classic “Top Gear” challenge, the hosts compare is it worth driving new Ford GT from Central Park in New York City to Niagara Falls or taking public transport to get there. In another episode, trio compare three (well, maybe more) pre-owned Jaguars to prove their worthiness as a used car. Then Clarkson takes a magnificent Bugatti Chiron on a GT ride in Alps, Hammond drives a tank called Ripsaw in desert and through the mall, and May tries to put out fire in modified Lada Riva. Tesla Model X, Lamborghini Huracan Performante, McLaren 720S – these are only some of the cars featured in the show.

While even less coherent than first season (which one was actually pretty weird to begin with), the show stays fun to watch. It still delivers on the premise of having Clarkson, Hammond and May bring their witty comments on the cars and what-not. The structure is very confusing, but you get used to it. From technical point the show is just incredible to watch. Slow motion, close-up shots of cars, filled with the cars speeding through the corned seems like a dream. A dream that some day you will be able to sit and drive the cars show hosts are reviewing.

Full with witty commentary by the hosts and incredible shots of amazing cars, the show's structure sometimes wears you down.