It is very hard nowadays to find a comedy that is innovative, interesting, has sympathetic characters and, most importantly, is genuinely funny. They say comedy is the most difficult genre to write. I tend to disagree. Comedy is a very easy genre to write, but a good comedy is an extremely challenging act. What we have in the example of “Game Night” is the film that is truly one of the better comedy films of last several years.

Max and Annie are a perfect couple. They are both hardcore gamers. They met during trivia game in a bar and immediately kicked it off. Being super-competitive, they compliment each other in every way. And now, after establishing a family together, Max and Annie serve a game night every Saturday. Usually attended by their friends (though not their neighbor, Gary, who got creepy after his wife left him) they spend the night playing Monopoly, Scrabble, Charades, or pretty much anything that can have a winner and a loser. That is until Max’s brother, Brooke, arrives one day. He is a very successful international businessman and he offers the group a new game. They will be playing a real-life simulation and will have to solve some kind of murder mystery. Thing is though, no one will know what is real and what is fake. And the game starts. 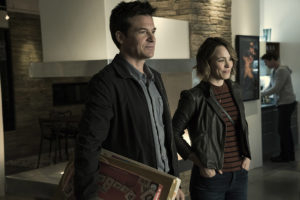 For a regular comedy film, “Game Night” has a uncharacteristically strong writing. The main characters Max and Annie are extremely well defined. Expositions do not feel very forced and yet by the end of the film it seems we know everything about our heroes. They are presented not as a clumsy bubbling game nerds, but as a lively couple who are very competitive and love to do what they do. Film stays away from cheap laughs in the expense of shortcomings of main heroes. We root for them, we want them to get the happy ending, we genuinely follow their adventures. Supporting characters, though some might feel cliche, are also well written. They are not just there to spend our screen time, they are part of the film and part of the game. Every supporting character gets a fair share of backstory and also affects the plot progression.

Movie is very similar in tone to “Horrible Bosses”, the reason being that the directors are John Daley and Jonathan Goldstein – pair who wrote the “Horrible Bosses” and it’s sequel. There are a lot of laughs and gags throughout. Directors even manage to squeeze in very interesting camera shots, like a very long take with the Faberge Egg and macro-lens expositions. Also the film is rated R, but it does so to justify the plot and to compliment the storyline. Unlike some directors who like to include violence, profanity and nudity for absolutely no reason. Also I very enjoyed how directors set the pace. Introduction was very fast, the expositions felt natural, we get to the point very fast and we stay in this high adrenaline pace all the way till the end. It’s a game after all, it is supposed to be fun! 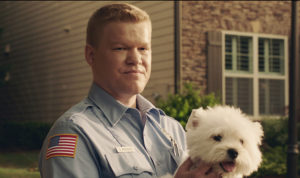 Jason Bateman has been typecast as poor, overworked, suppressed, submissive goof probably a thousand times. He fills in perfectly. But the goof that he plays in “Game Night” is probably his most sympathetic character. You might think why do I need to root for this guy, he is just a nobody and why exactly Annie loves him. But while watching the film, you realize he is not just a manifestation of writer’s mind, he is real. Same goes for Annie, who is played by Rachel McAdams. She utilizes her experience from romantic films to make Annie cute, caring and supportive to Max. When otherwise Max could have seem like a weirdo, Annie makes him human and not just a regular comedy hero who we can laugh at.

Supporting cast, though comprising of relatively unknown actors, also provides a fresh relief. They all compliment the story in their own way. Jesse Plemons, who plays creepy police officer neighbor Gary, on the other hand, steals the show with his Clint Eastwood-like facial expression while delivering his lines. And he truly looks creepy. I would not like to be his neighbor, for sure.

“Game Night” is a fresh, delightful and truly funny comedy. It captivates you from first scene and takes you all the way to the end. It has very talented cast, smart writing and engaging directing. I would recommend watching it if you get a chance.