Despite a messy third act, "Fahrenheit 451" is a very interesting watch, which proves that even though 50 years passed since book was written it still is very valid as cautionary tale of what humankind can become

Fair warning, I will not compare the new “Fahrenheit 451” to Ray Bradbury’s timeless classic, as that is probably as good as comparing Zach Snyder’s “300” to actual events of Battle of Thermopylae.” In that terms, it’d would have been rather more appropriate to call this new film “Based on Fahrenheit 451”. So, I am writing this review purely about the film itself.

Guy Montag is a Master Trooper. He burns. Books, films, music. Everything that is not on 9 – a futuristic version of government-controlled internet. His boss, chief fireman Captain Beatty reminds him constantly that books, fondly called “graffiti” by the government, is evil. People who spread “graffiti” are called Eels and are constantly hunted by firemen, just like Montag. Then one day, based on a tip, they stumble upon an old woman who has a whole room filled with books. Montag has never seen so many books in his life. Beatty tells him this is probably last time they will ever witness a view like this. They gather books and get ready to burn them. But before they can do it old woman sets her books and herself on fire. Montag is shaken. How could she kill herself over just a bunch of books? And he starts asking questions.

Ramin Bahrani adapted and directed “Fahrenheit 451”. His characters live is dystopian future, which is rather not so subtly based on our present. Guy Montag is a child of propaganda. He says what he is told to say. He acts however his superiors want him to act. Have to give credit here, his character is totally believable. His boss, captain Beatty is an epitome of Big Brother, that wants you to do everything without asking questions. Books are bad. He embraces that. “Why ask two questions, when they are contradicting each other?” he asks. Beatty is a character that understands that system is flawed, yet he believes in it and is ready to do anything for it. 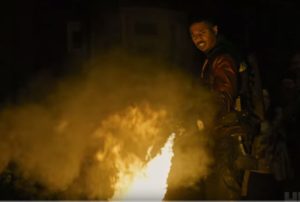 In the beginning, Montag worships Beatty. After all, Beatty raised him. Single-handedly selected him to be in the firemen program and nurtured him to be his successor. But maybe he raised him too well? Seeing woman burn herself creates a huge gap in Montag’s mind. Why did she do it? Are the books worth it? Why burn yourself for bunch of paper with ink on it? This is completely incomprehensible to Montag’s perception and that pushes him to explore, to know, to experience this all on his own. Wasn’t he just a product of the propaganda who deliberately wanted him to be the opposite?

What I didn’t like was overall the third act. It felt first of all weird, inconsistent with the whole film. The ending was rushed and, in my opinion, lacked emotional context to it. I also didn’t like several supporting characters. Unlike Montag and Beatty they felt unreal.

Bahrani uses several things to make this film interesting. Firstly, there is a weird “big brother watches you” version of Alexa that monitors everyone’s activity. You can’t hide from it no matter what you do. Secondly, I liked how Bahrani showed us the internal struggle of Captain Beatty with his own questions, that he masterfully pushes deep inside. Though Montag is our main hero, but by giving some focus to Beatty character, director gives us something else to think about. Thirdly, it was uncanny how much “future” looks like now. In the best tradition of “Black Mirror,” everywhere there are big screens with “live stories” and people liking/commenting in real-time to the events. For them it is all about reality show.

Again, my biggest issue was with the pacing of the third act. While first two were paced slow, with increasing tension, third act was rushed and raw.

Michael B. Jordan plays Guy Montag. Just like his character Killmonger in “Black Panther,” Jordan gives us strong, propagandist version of Montag with precision and determination. But more than that, he is also able to provide emotional and nearly heartfelt performance whenever Montag seeks answers to his questions. Michael Shannon as Captain Beatty is a wander to watch. This role is made for him. And I now he has been typecast so many times into this role of ruthless and borderline maniacal supervisor. But Shannon never backs out from it. Instead he doubles down and delivers films best performance. Sofia Boutella stars as renegade Clarisse, but film doesn’t give her much to work with and never offers her enough time to do anything with her character.

Despite having its own share of flaws, film is a very interesting watch. Complex social commentary sticks out a lot, but director proves that even though half a century passed since Ray Bradbury wrote his book, “Fahrenheit 451” is still a valid cautionary tale of what might happen to us as a humanity.