The Death of Stalin

Incredible source material, presented it in a unique way, and outstanding performances of extremely talented cast gets this movie to another level.

It is very rare nowadays to see a spectacular cast truly enjoy themselves so much while performing their roles. From the first scene we are invited to a very meticulously arranged movie that we totally believe in it. And doesn’t matter that you know almost nothing about the backstory. You will be given enough information. After all, can there be any better source material than “The Death of Stalin” and immediate aftermath of struggle to fill the power void left by the timely passing of most brutal, intellectual, outstanding, paranoid, narcissistic and explosive politician in human history, second probably only to his archenemy Hitler?

Radio is streaming a live concert. A phone call. Radio supervisor answer. Caller is no other than Comrade Stalin himself ordering a copy of the recording. Of course, they were not recording it. Before supervisor can recover from shock the concert ends and audience starts living. Supervisor sees no choice than to replay the whole concert again and this time record it and pretend that no one screwed up. After all, who would dare telling Comrade Stalin that the concert he enjoyed so much was actually not recorded at all! Everyone scrambles to their places and they deliver the recording (barely). 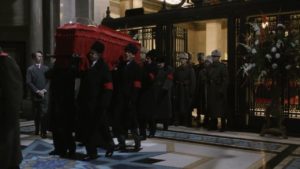 Stalin is being carried by members of Central Committee

Little they know that as soon as Comrade Stalin will put the recording on that he will collapse from brain hemorrhage. And no one will dare to enter the room, afraid of Stalin’s notorious explosive behavior. And he will lay like that in his own urine for 12 hours before Stalin’s inner circle, so-called “Central Committee” members will appear next morning to figure out what is going on. They are Beria (Stalin’s security and henchman), Malenkov (Stalin’s de-facto second in command), Khrushchev (Minister of Agriculture), Molotov (Premier), Zhukov (Head of Army), Mikoyan (Chairman of Ministers), Bulganin (Defense Minister), Kaganovich (Minister for Labor). But before anyone calls a doctor (by the way, all the best ones were killed already) this group of people realize that maybe letting Stalin just lay there and die is the best solution for everyone?

No one knows for sure what happened those days after death of Stalin. The political struggle (in real life) lasted over 3 years. Half of the people present in that room were dead within a year. And even though we are talking of 1950’s, not Ancient Egypt, there is no single version of the events. Official documents were constantly modified during next 40 years to convey new political policies and regime changes. What people said, who yelled, who smiled. Nothing is static anymore. As surprising as it might seem all there is, is just a oral witness testimony. 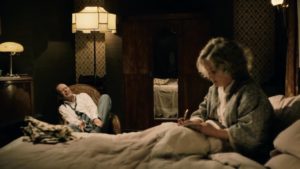 Screenplay shows us all the craziness and absurdity of what might have happened. The intricate details of Stalin’s rule during last years (watching cowboy movies until dawn), senseless mass executions orchestrated by Beria, eternal ass-kissing to the spirit of Stalin even after he dies, constant looking over the shoulder as you might end up in a ditch with a bullet in your head, even though you are the most powerful person (at that given time) in USSR – writers deliver it all with precision and unbending satire. And though for an outsider who has no clue of who Stalin was that might seem a little too far-fetched, having a privilege actually of watching several documentaries on the subject (made by Russians, by the way), for me it seemed totally believable.

The source material is epic. And writers could have gone different routes as how to do that. Instead, they chose to show everything from satirical point of view. Which opened up some big challenges with directing. 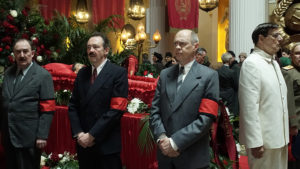 Even with dead Dictator behind Committee Members find time to bicker

First of all, bear in mind that almost all of the people we are talking about are monsters. They orchestrated and supported mass murders, genocides, rapes, exiles, bribery, robbery, terrorism, treachery – pretty much every single horrible thing that you can imagine. They have done it all. 60,000,000 people are believed to have faced repression or discrimination during 30 years of reign of Stalin. Multiple members of my own family has been killed, exiled and/or forever lost. So of course film goes to a lot of dark places. Director Armando Iannucci chose to show them all through the glass of satire, comedy, farce and irony.

What confused me a lot was that the film makes so many wild turns in terms of what it wants to portray and how. In one scene you have farcical, Three Stooges-like scene with Committee Members trying to move dead body of Stalin. In the other one, armed forces open fire on the civilians who were trying to get to the funeral. There is a sweet incompetent babbling that make you smile. And then scene directly referencing pedophilia that will make you cringe. This back and forth, unfortunately, made me feel uneasy and not sure what I am seeing. It was like watching Monty Python try to recreate Shawshank Redemption. And not even the funny version, but the actually try to play it with full seriousness. 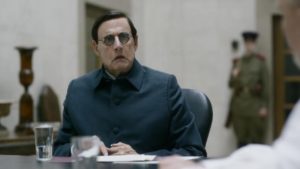 Malenkov (Tambor) is not sure he wants to be there. At all.

I can probably write a whole blog post about the acting in this film. It’s probably one of the best performance from a group of people I have ever seen. And though most of the cast members seem to be typecast, it is incredible what they bring to their characters. And funny thing is – they all enjoy it! You can see from their faces their true fascination with the roles they have been given. They are not acting, they are living these roles!

Steve Buscemi plays Khrushchev (WTF, right?!). He plays a very careful man who tries to not only appease Stalin, but also stay alive from scheming Beria. Simon Russell Beale plays him and he is EXACTLY how I ever have imagined Beria to be. Calculating, ruthless, manipulative, sadistic. Beria is on a war path and for that he will get into the head of panicking Malenkov (Jeffrey Tambor). This role was made for Tambor. It’s simply unbelievable how he can make a person look stupid without even opening his mouth. You can probably mute his speech and still get every single thing he says from all the emotions Tambor portrays (or sometimes doesn’t). 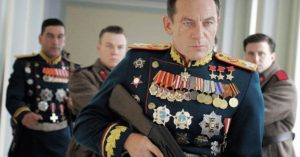 Zhukov (Isaacs) is ready to kick some ass. Literally.

Speaking of Monty Python – Michael Palin plays Molotov. Yes, the one after whom the famous “cocktail” was named after. His version of this monster shows him as down to Earth, kind guy, whose whole ideals lie in the path of Lenin and Stalin. He just wants to bring order, regardless of who actually takes the helm. Palin makes this character so likable that you might forget all atrocities Molotov has committed in real life.

Finally, I would like to specially mention Jason Isaacs who plays charismatic, tour de force Marshal Zhukov. Yes, same Zhukov who was the most decorated USSR war hero of all times in and who obliterated Nazi Germany. And Isaacs plays him exactly like that. He delivers almost Caesar-like portrayal of character, who owns everything in the room as soon as he walks in.

Armando Iannucci manages to take incredible source material and present it in a very unique way. With support of outstanding performance of extremely talented cast he gets this movie to another level.