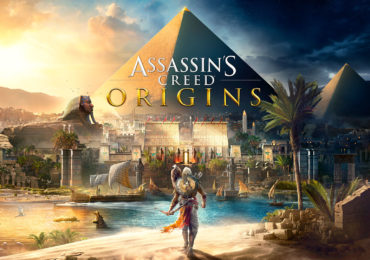 Assassin’s Creed Origins is a first of the series to have full feature open world. And that’s basically what makes this game fascinating in a first place. Historically limited by the genre of “silent assassin needing to stay on path”, this game offers complete deviation from the main formula of the series. They had a reason to stick to main path: back in those days it was not feasible making huge open world concept games. Thus we were told that all the action happening in the game was premeditated. It was just a memory of the ancestor of main hero. All we had to do was follow the steps and any time player would stray, game would reset to the checkpoint. Elegant solution, isn’t it? How many times would I play the game and think, man, this doesn’t make sense to follow the rules. Why do I need to kill a horde of enemies, if I can just bypass them altogether?

So, I am sure, inspired by success of Witcher 3, Fallout 4 and GTA 5, Ubisoft decided to make the game completely open world. We can roam the endless vastness of the game world, choosing what missions and when we would like to take and how exactly we would like to play the game. Want to take an open challenge against army just to pass through? Go ahead, attack them! Want to sneak past the whole garrison instead and kill the Commander only? Sure. Just arm yourself with predator bow and start sniping soldiers. Hell, there were missions that I didn’t even kill a single enemy! It’s all up to your mood and what you want to do.

This also unfortunately pushes out-of-memory world (real time) completely out of the picture. Whereas, in previous games main hero was strapped into Animus and also had to go through his own missions (which was a very nice break sometimes from main action), in this game real hero is out of equation at all. As far as I can remember there is only 2 missions in real world. Which is sad, because I clearly wanted more.

Then there is also a question of predetermination. Per logic of the game, where the game was something that already happened, this time it made little sense in terms of what exactly is going on. Like why do we even need to play these 120+ missions? What for? And indeed, you can just play only 35 or so main missions and be done with the game in under 20 hours. The rest of the missions turn out to be just an adjacent attraction. Which is shame, because in my opinion, some of the side missions were way better than main story missions. Thus, you might have read some reviews online of people who would complain of story line based only on main missions. 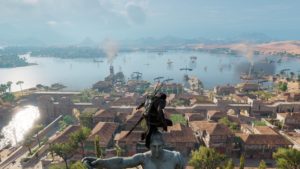 Amazing view of Alexandria with Great Pyramids in the back

Man, this is where this games breaks all. Not only it is set in Egypt, circa Cleopatra and Caesar, but it covers VERY vast area. The design of the game is beyond imagination. Playing this game on top parameters (EVGA 1070) is so damn distracting! I swear you, sometimes I would just stand down and go into Eagle mode just to look around and enjoy the surroundings. The level of detail gamemakers put into this is something worth paying full price of the game. Static world is just unbelievable good. Animals are very good, but human characters look weird unfortunately. But hey, I am not playing this game for the humans!

Then there is RPG aspect of it. You will need to build Bayek (main hero) literally from scratch. Constantly upgrade the weapons. You will end up looting and ransacking every single cache, satchel, box, corpse, horse, animal you can lay your hands on. What I didn’t like is that resources are everywhere. And when in Witcher, for example, you are forced to seek resources, in ACO resources are not that hard to come up. This is specifically true if you just stick to just one style of fighting. Find weapon you feel most comfortable with and just go for it. And actually, it is the way to win this game. You will have a choice of sword, dual short sword, spear, ax, bludgeon, scepter and if you start developing everything you are doomed. Same goes for the armory. Just stick to one style.

Speaking of sticking to style. As with all games of this kind, once you find that style nothing can stop you. You will fairly fast understand how to defeat the NPC even several levels higher than you. This will not change till the end of the game. It might get boring. But this is where open-world concept comes into play. You are no longer bound to play as the gamemakers want you to play. You can invent new ways of completing the damage. For example, towards the end I just started setting soldiers on fire instead of fighting them with swords. And to my surprise the whole fight dynamics changed. So now instead of chasing you the AI forced soldiers to try to save themselves. It was really eye-opening.

It is very engaging and beautiful game. However, as I mentioned, at times it might feel a little boring having to roam deserts on a camel. Make sure you visit all the side quests and do as much as possible to truly appreciate this incredible game.

Incredible made, this new chapter offers something previous games in the series didn't - open world concept and RPG.