The heartfelt message, emotional connection, humor and charming characters failed to impress me at all, maybe because I am not a dog person.

Wes Anderson deserves his own film genre. Not because his style doesn’t fit anywhere, but since he constantly deliver films that push the boundaries of other well established genres. In that extent, “Isle of Dogs” is a fine example of a wesandersonian film. But unlike other films of Anderson, I didn’t like it. Didn’t like it at all.

Thousands years ago dogs ruled the Earth. And then cat-loving Kobayashi clan appeared and announced war on dogs. They were able to kill almost all dogs, but one young boy stands up to the Kobayashi clan and kills their leader. He then announces dogs to be friends. For thousand years, Kobayashi family kept grudge on that. And finally they are able to achieve revenge. In present day mayor of Megasaki City, Kobayashi, announces that dogs have widespread dog flu and are turning rabid. In order to save population he orders all dogs to be shipped to Trash Island. As a fair example, he sends his nephew Atari’s dog, Spots, no an island as a first dog to be banished.

mped to island. One of these packs is the collection of five alpha dogs, Rex, King, Duke, Boss, and Chief. One day they see a small airplane crashlanding on the island. They discover young boy flying it. He is Atari Kobayashi, he came to island to locate his dog, Spots. Despite protests of Chief (who among the group was the only stray dog) pack decides to help Atari find his beloved pet. 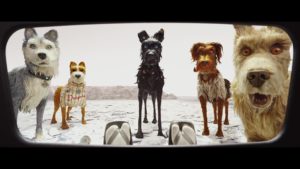 “Isle of Dogs” has a fair share of classic chaos and humor that Wes Anderson films usually have. However, the story seemed bleak to me. I don’t know, maybe because I am that weird guy who is not a pet person at all. Should I’ve been a dog lover to appreciate this film? I am not sure. Regardless, I was surprised to see how uncharacteristically boring and dull film seemed to me and how the other people in audience laughed every time there was a stupid dog joke (“If you see that bitch, Nutmeg…” referring to a female dog) or awed when something cute happened, like dog liking Atari’s hand. To me, it was all lost.

Character motivation was ridiculous at best Chief is a stray dog, he doesn’t want to help Atari. He is persuaded to join only because some bitch (female dog) Nutmeg tells him it would be nice to help Atari because “he is 12 years old and dogs love that.” There is whole storyline (of course) of Chief becoming domesticated and accepting Atari as a master. Why should he? Film implies every dog needs a master. That might be true in real life, but from proud humanized Chief’s perspective it seemed degrading. And Atari does nothing to gain Chief’s acceptance. All he does is order him stuff and then tell him to lick his hand. Come on!

There is incredible amount of supporting characters, most of whom, don’t even need to be there. Are they there to accommodate all friends and collaborators of Wes Anderson? It feels like that, because most of them don’t drive the story forward and literally have two or three sentences to say. Like there is literally three translators and a narrator. Why? Story wanders back and forth a lot, is broken down to chapters (surprise!) and the only thing keeping it together is directorial job by Wes Anderson. 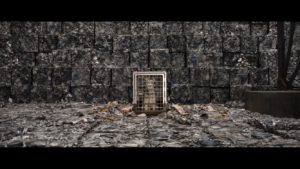 Spots alone on the Trash Island

Film is full of Anderson‘s (now cliche) elements. From weird framing, funny camera angles to “surprise” reveals and uneasy resolutions. Everything screams his name. He is able to keep the story coherent, even with a messy plot and incredible amount of supporting cast. My biggest complain is style he chose. Film is stop-motion animation, which a lot of directors choose to use due to three dimensional aspect. Instead, Anderson places the characters on a same plane, usually facing camera either dead on or on profile. This all makes the sets very, very 2D. Why then use stop-motion animation to achieve “South Park” effect? Seems like total waste of opportunity.

The heartfelt message, emotional connection, superb humor and charming characters – everything the people see in this film – failed to impress me at all. To me, film had messy plot with weird motivations by heroes, huge cast that was distracting main plot and ridiculous ending.

The Adventures of Tintin