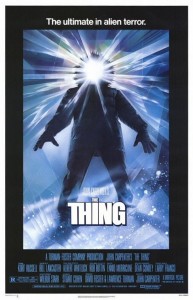 John Carpenter’s movies are everything but beautiful. His long list of gory motion pictures is filled with shocking violence and cruelty. But his 1982 horror (suprise!) film “The Thing” stands aside and offers a very amazing perspective of development of a storyline.

The film begins with a dog running thru snow covered land of Antarctica. The second and you see a chopper in pursuit of the dog and guys in the chopper throwing hand grenades and shooting from sniper rifle at the dog. That’s it. For the next 5 minutes you’ll be wondering what the hell is going on. As well as the members of American research mission to whom the dog is running too. Of course, american prefer to shoot and then ask questions and next thing you know is exploded chopper and shot to death guys, who appear to be crewmembers of neighboring Norwegian base.

A perfect hook for the watcher. Now you are dying to know what was happening, why the norwegians were trying to kill the dog and why the dog is so quiet. So does the Americans. They fly to norwegian base, find it destroyed in fire and found out pieces of information about what’s happening. And of course, not only the information, but also the reason for the whole chaos.